Rolling papers have been a classic option for any cannabis or hemp smokers for decades. For many of us, it was the way we were introduced to cannabis, and a joint rolled in rolling paper is one of the most iconic images of cannabis use.

As cannabis use becomes more widespread across the United States, pre-rolls and blunts have become one of the most common ways to consume because of how easy they are to use and how easy they are to share, evolving from uneven hand-rolled joints and tobacco blunts to pre-rolled cones and blunt wraps made from other alternative leaf options like Cordia leaf and Tendu leaf.

On the other hand, smokers enjoy natural leaf wrap blunts because they smoke slower, making for a longer smoke sesh. Blunts also cool the smoke more, and the filter options do more to filter small particles than the classic W paper filter pre-rolls are usually fitted with.

So, when it comes down to it – which is better? Traditional paper, or natural leaf wraps? 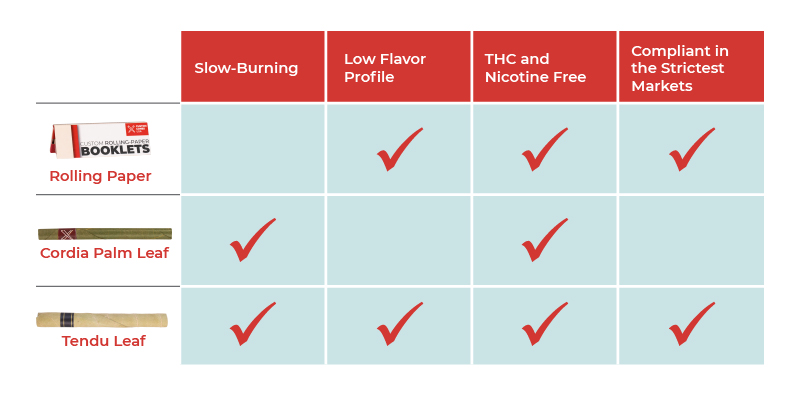 What are Cordia Palm Leaf Blunts?

Natural leaves have been extremely popular internationally, with cured banana leaves being amongst the first ways humans consumed smoke, whether they smoked cannabis, tobacco, or other herbal products.

However, the United States market has historically seen an absence of natural leaf smoking options other than tobacco leaf wraps – that is, until recreational cannabis started hitting the shelves, and cannabis producers began seeking ways to make their products stand out amongst their competition.

King Palm jumped on the opportunity, releasing their wraps and tubes made from Cordia palm leaf and dubbing them King Palm leaves. As the first cannabis-targeted natural leaf rolling paper alternative to enter the market in the US, they struck gold and quickly became one of the most popular alternative rolling paper options available. They started with 1g and 2g size options, designed for group settings where a blunt can easily be passed around.

The Cordia leaf features a luscious dark green color and grow across southeast Asia. The high amount of chlorophyll results in an earthy taste being added to the smoking experience – in contrast to the curing process of cannabis and tobacco, which remove chlorophyll from the plant in order to improve the smoking quality. This is why tobacco goes from green to a shade of dark brown.

Because the leaf is thicker than traditional rolling papers, it smokes slower and produces a thicker smoke. A tube shape is incredibly popular for Cordia leaf wraps, as it gives the feel of a cigar and provides a luxury-feeling smoking experience that makes brands stand out among competitors who commonly use a cone shape for their pre-rolls.

The corn husk filter also helped King Palm position itself as a healthy alternative to the normal blunt wraps. Its 2 pack bags quickly becomes 5 pack, 10 pack, and even 20 pack bags, as consumers went to retail spaces and were able to quickly pick up their palm leaf wraps with their flower. They also began to collaborate with companies like Boveda to have their leaves come sealed in a bag with a moisture pack to keep the leaves fresh.

The introduction of King Palm was the surge the natural leaf market needed, but the question still remained if it offered the best smoking experience out of all the natural leaves. Consumers liked that the leaf was a nice green color, but is a green leaf really better?

To fill the void this question posed, it led many competitors to begin to take notice of King Palm and begin the race to produce the best-smoking leaf. Brands like Million Bananas, High Hemp, and Juicy Jay were eager to either offer pre-rolled wraps, or give the consumer the option of rolling their own blunt with a natural wrap.

This isn’t an uncommon phenomenon – papers that are made from plant materials and plants absorb contaminants from the soil they are grown in.

It is because of this that strict states like California test the final cannabis product going on the shelf, wrapping included for items like pre-rolls and blunts, rather than solely testing the flower that goes into the products. And this is also the reason that California has banned King Palm Cordia leaf wraps for use with cannabis products to be sold.

Cordia palm leaf wraps are able to be sold in most cannabis markets in the US, as most states only test the flower that goes into the cannabis products, rather than the wraps themselves.

Custom Cones USA offers our own Cordia leaf wraps, available in 85mm half-gram cones, 105mm full-gram cones, .5g tubes, .7g tubes, 1g tubes, and 2g tubes. They come standard with a classy black band at the filter, but these are able to be customized to match your company’s branding. 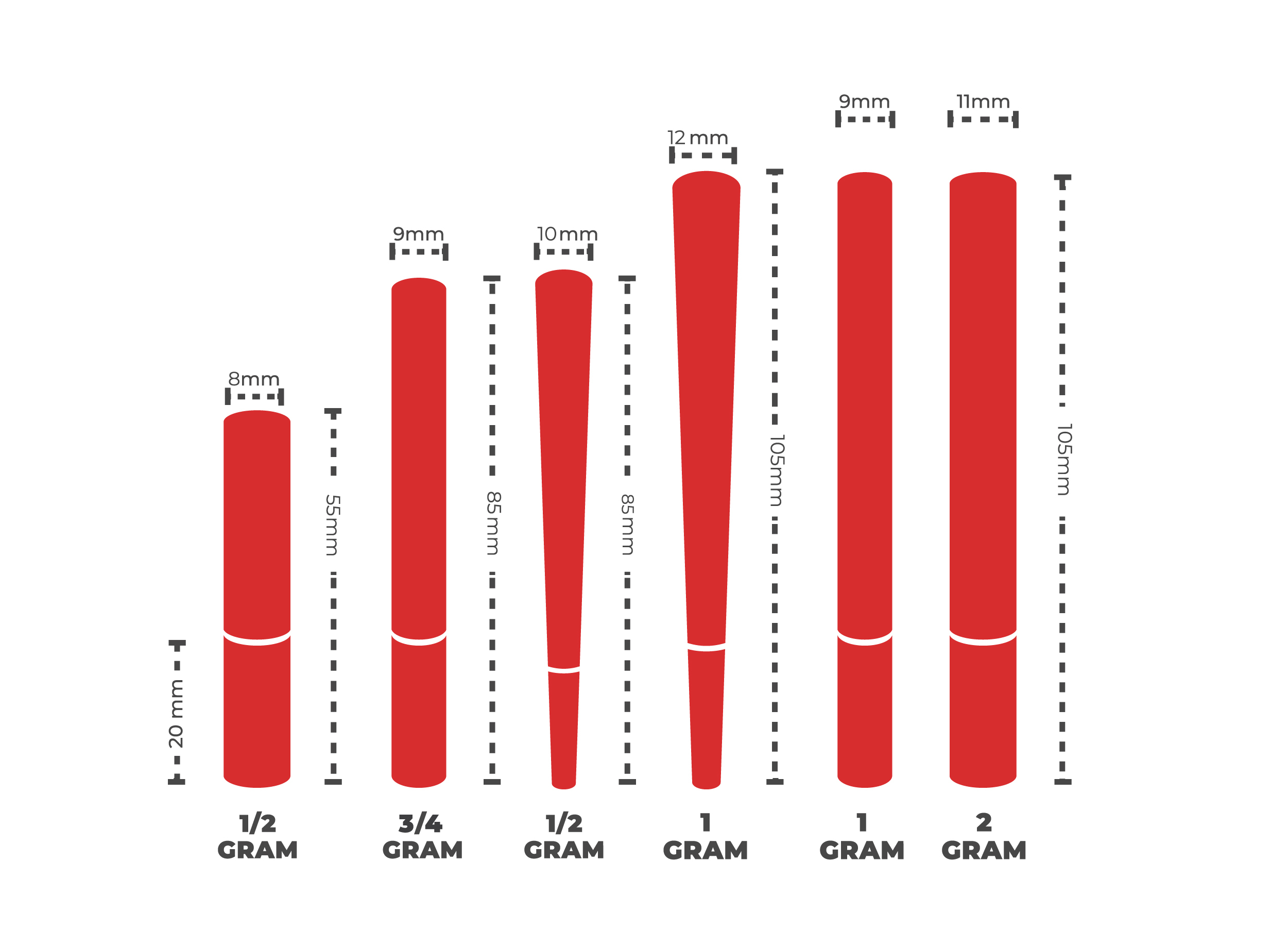 What are Tendu Leaf Blunts?

Similar in feel to the Cordia leaf wrap is the Tendu Leaf Wrap. The Tendu tree is found widely across central India, and is commonly used for Indian bidis, which are thin, hand-rolled tobacco cigarettes wrapped in Tendu leaf and tied with a string of adhered at one end. Tendu leaf is also a common home remedy in traditional Indian medicine.

Embed this photo to the left, surrounded by text, 400 pixels wide: https://cdn11.bigcommerce.com/s-6sh61ukxmz/product_images/uploaded_images/natural-toasted-tendu-leaf-pre-rolled-blunts-.7g-mini-600px.jpg

The tendu leaf has taken the US cannabis market by storm. With its scientific named being Diospyros melanoxylon, the Tendu leaf wrap has been incredibly popular globally, in areas like Germany, the Middle East, and Japan largely using them to roll tobacco, similar to in India. Since the Tendu leaf is flexible, does not crack when dry, and the soft texture makes it an amazing leaf to use for rolling.

What is the Difference Between Tendu Leaf and Cordia Leaf?

The biggest difference between the Tendu leaf and the Cordia leaf is the way that thy are cured and prepared for use. The Tendu leaf is toasted, removing chlorophyll and other plant components. This results in a lighter color of leaf, and a less prevalent taste to interfere with the taste of the flower.

Our Tendu leaf blunt wraps are available in 85mm half-gram cones, 105mm full-gram cones, .5g tubes, .7g tubes, 1g tubes, and 2g tubes. They come standard with a classy black band at the filter, but these are able to be customized to match your company’s branding.

How to Pack Natural Wrap Blunts

The most common way to pack blunts is to pack them by hand with a manual tamp for an even pack.

While many pre-roll filling machines are yet to be compatible for filling blunt tubes, the Fast Fill can get the job done easier than packing blunts by hand, one by one. The Fast Fill is available in 55 or 121 capacity, and the vibrating base allows for an even pack that ensures a smooth smoke.

It’s important to note that, because Cordia Leaves and Tendu Leaves grow in a variety of sizes, there is a variability in the size of the blunt tubes. This means that some tubes may not fit into certain filling machines, or the height may be off by 1-2 millimeters.

The variability in size also impacts the weight of each tube, meaning that each tube may not all weigh the same, and this may create a challenge when it comes to weight compliance and accuracy.

Along with the leaves themselves, the natural leaf market is also experiencing innovations in the packaging these products come in. Initially, simply having them in a mylar bag was the beginning, with simple branding on the front. Mylar bags began to have a clear window in the front of the bag to display the leaves, allowing consumers to see what they would get and prevented anyone being afraid that once they left the store, the contents could be dried and cracked, like many experienced with Backwoods. Since these leaves are not regulated like tobacco products, the marketing done on the bags were also vibrant in color and added many words like certified organic, even if they weren’t certified organic.

Because natural leaves provide a more luxury feel to the smoking experience than normal rolling paper, it opened the door for premium flower and infused flower options for 1 or 2 gram blunts. As these products are priced at higher price point, the packaging began to matter too. Many brands began to experiment with different luxury packaging options, with glass screw-tops and cork-tops that feel much more premium than ordinary plastic child-resistant joint tubes.

The labels placed on these glass tubes were also started to look much more appealing, as brands began to use finishes like foil and soft touch coating to further stand out. These products found in the dispensaries are resembling more and more the premium cigar market, as the market for smoking cannabis continues to grow, and it becomes more and more of a socially-acceptable norm.

Because natural leaf blunt wraps are made from a simple leaf, they are prone to drying out. Drying out can cause them to crack, and creates a poorer smoking experience overall.

An easy solution to this comes in a tiny square pouch and are available in a variety of sizes depending on the amount of cannabis you’ll be storing with them! Moisture packs have become increasingly popular as blunt wraps have increased in popularity.

As we keep both the hemp and cannabis market clean, these natural leaf wraps not only look like the future, but offer a true enhancement to the smoking experience in a natural way for hemp and cannabis smokers worldwide.

Rolling papers will always be popular among cannabis consumers, thanks to the low flavor profile paper adds to the product, as well as the low price. However, natural wraps are a great premium option to upgrade your pre-rolls to blunts and enter the premium blunt market. The slow burn and premium feel cannot be matched by paper products, but the bottom line comes down to what type of audience you are trying to target to smoke your products.